Why is WaveEtch a Better Choice 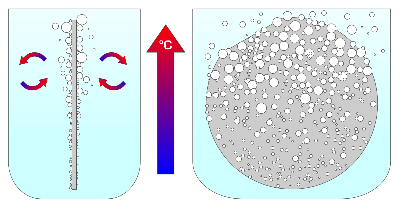 Most relevant features in the outcome of wet processes are controlled by transport phenomena. The given chemical mixture and the substrate material surface determine the ultimate outcome of a series of reactions, but the rate at which this happens is usually limited by the supply of reactants to the reaction zone and the capability to rid it of chemical byproducts. The reaction zone is generally contained within the “boundary layer,” thus the reactants and byproducts must all diffuse across it. As a consequence, boundary layer properties, such as thickness and uniformity, are very important in determining the outcome of a wet process. 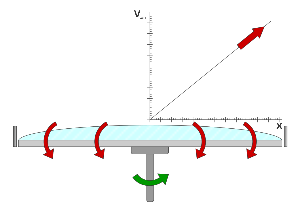 Conventional wet etching processes, such as immersion, spin or spray etching, all have intrinsic non-uniformities in the the boundary layer that result in etching non-uniformity. The boundary layer’s thickness and other characteristics vary depending on the chemical’s flow properties, the nature of the chemical reaction, the wetting behavior of the interface, and the temperature. In general, for a wet process to be uniform, the thickness of the boundary layer has to be uniform. Boundary layer thickness is affected by agitation and shear forces imposed by fluid flows across the surface being processed. Therefore, convection and surface speed gradients are determinants of the uniformity of immersion and spin/spray processes, respectively. See Fig. 1. Physical limitations of agitation schemes and gas evolution pose constraints on the best uniformity achievable by an immersion process.

Similarly, speed gradients across the substrate in spin (Fig. 2) or spray (Fig. 3) processes pose a uniformity limit on the process for any given substrate diameter; large nonuniformities may be seen in larger diameter substrates targeting significant material removal by a spin process.

Recently, many critical manufacturing steps have also become “single-sided,” such that the substrate can only be exposed to the chemical on one side. This requirement is often brought about by the presence of devices or structures on the nonprocess side, or the more general requirement that the nonprocess surface is left in the current state while etching is performed on the opposite site. Vapor damage to the nonprocess side also has to be avoided. 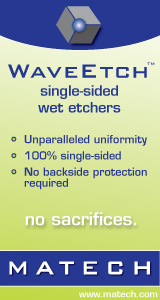